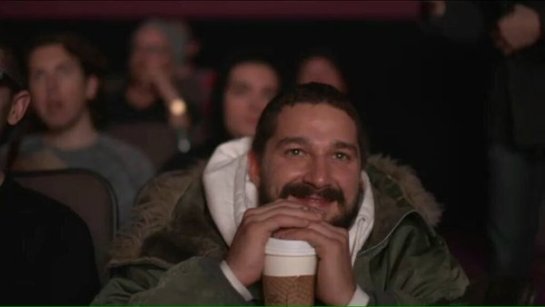 So I followed his career the whole way: from that awful Dumb and Dumber prequel to Charlie’s Angels 2: Full Throttle, from the secret gem of a movie A Guide To Recognizing Your Saints to *shudders* the Transformers series. The movies varied in quality sure, but I felt like his proud best friend the moment he became a movie star and it hurt my heart the most to see what that kind of fame did to him…. at first.

I’ll be the first to admit: I don’t actually get Shia Labeouf. He’s still charming and irreverent in TV interviews, as though he’s still a kid just happy to be there. He seems to resent celebrity but I mean everyone hates celebrity, so it’s not much of anything to note. He has daddy issues which I can relate to, he dresses like your divorced uncle going grocery shopping which is a look I can get with and he does things that feel like purposely sarcastic commentary on life which is also right up my alley.

The whole performance art thing was easy to dismiss at first. The “I’m Not Famous Anymore” stunt was ridiculous and hilarious. When he turned up on a red carpet with the paper bag over his head, it irritated people (which felt like the point) and it seemed to be the latest in a long line of signs that Shia Labeouf was spiraling towards the bottom. Then it became one big performance art piece titled #IAmSorry at an art gallery in Los Angeles, where anyone could come in and interact with Shia in anyway they wanted to. Shia himself had the bag over his head and refused to talk or move. What was sure to be one big joke of an event, where any reporter who could nab the story could go in order to make fun of the ludicrousness of this social experiment, instead turned into an empathetic moment of connecting with a celebrity. The reviews were pretty positive but it didn’t signify much of anything other than people who mocked Shia now hoping he found a little happiness.

After this, there were other stints at performance art, including one in which Shia made a motivational video in front of a green screen reciting statements sent to him by fans, but none of it compared to Shia’s latest production: #AllMyMovies. The idea is simple enough: Shia shows up to an open movie theatre and watches every single movie he’s ever been in reverse chronological order while a camera records his reactions the entire time.

On its face it may seem like a narcissistic endeavor into self-voyeurism, but it only seems that way because it is –in a sense. All of Shia’s performance art seems to be some sort of metamodernist exploration of our self-aggrandizing, internet-fueled and celeb obsessed culture. Where “I’m Not Famous Anymore” put the onus on the people to gauge a reaction, #AllMyMovies was 100% about Shia. In a sense, it’s like watching all your home movies with strangers, in another it’s essentially taking in all you’ve accomplished with your career up to this point and assessing where you came from.

It’s the same sort of fixation we all have with ourselves–our tweets, our instagrams, our bodies, ourselves as brands–exacerbated to a fuller extent. Also, it’s an excuse to go back to the oeuvre of Labeouf: the good, the bad and Eagle Eye. #AllMyMovies has been a hit with critics and has provided the internet with the currency it loves the most: memes. But what was it really?

“In that room it was egalitarian. Yes, I was being stared at and I’m the focal point and the pointing is happening, but the pointing is happening for me too. If we’re all pointing, then we’re on the same level. Yes it’s a film festival where you’re watching all of my movies, but a lot of this stuff—especially Even Stevens…the Even Stevens Movie was interesting, it’s all of our childhood. It’s mine and it’s yours. It wasn’t just me smiling like that. If you look at the freeze frames, everyone is smiling like wow, I remember Beans. I remember that stupid-ass song. We were all looking at our yearbook together and we’re all in the yearbook. It felt like family, we were sitting there like a high school class.”

This was one of the more insightful statements made by Shia in his Newhive interview with his collaborators Rönkkö and Turner. What he’s ultimately getting across in this and many other portions of the interview is connection. Celebrity is a bubble and being an actor forces you to have a technical outlook on filmmaking; in this moment he was an audience member, especially late into the project when the novelty of Shia in the audience wore off and it just became about the movies.

This response is probably a little disappointing to anyone looking for some sort of detached commentary on modern self-obsession and performing for audiences. But while I’m sure there’s a sliver of this in the formation of the project, isn’t all of that about secretly about connection anyways. Living in a bubble (whether imposed or self-created) is lonely  and being disconnected from people for so long causes you to recede further into yourself to the point that you’re always on defense. It’s short-changing to say that Shia got to be human for 3 days, instead he got put in a position to be communal in a way he’s never had to be. Shia confirms as much, “I just know if I can explain a feeling, I feel lighter today. I feel love today.”

Shia found love by confronting himself head on and embracing everything that it entails. We should all be so lucky.

Twitter killed its fave feature and joined the ranks of instagram and facebook in utilizing “likes”. So now, what was once a star is now a little heart and because the internet is deathly afraid of change, people were not happy.

I get it. Things that are new are scary. Starring tweets was comforting: like when your tweet put a gold star on your homework assignment because you did a good job. “Hey kid, that’s a good tweet. Here’s a gold star. I am proud of you.” That’s nice to receive when you’re working overtime to make people pay attention to you online. But I think a heart is even more encouraging: it’s the extra kick you need that encourages you to keep tweeting. The easiest argument against the heart is that it’s too forward. It’s called the like button but it doesn’t really feel like a “like”, it feels like a “love”; as in, you LOVE this tweet. You’re probably thinking to yourself that a tweet is fine, you may even like it… but do you love it, and if you don’t, are you prepared to lie just to keep that tweet around.

Well I say do it. Who cares if you don’t love that tweet? You at least like it enough to consider it so why not entertain this lie. As a bonus, it’ll make the tweet maker feel really good. Also, from an aesthetic perspective, the like button is wonderful. You press it and it explodes in this quick orgasmic burst that just gives you joy. I’ve been liking tweets I don’t even care about just to see it over and over again.

If there is a valid criticism to be had about it, it’s the potential increase in misunderstandings. Twitter is already full of people (let’s be honest, mostly men) who read too much into things such as a woman favoriting a bunch of their tweets. The like feature just complicates that more because now it feels like she LOVES your tweets. Does she love your tweets enough for you to slide in the DMs? Probably not, but you’ll convince yourself that the answer is yes anyways. It’s here that we enter into what I now dub “The Heart Eyes Conundrum”. I’ll explain: every so often, I actually post a selfie on my instagram and sometimes when I do a woman friend of mine will comment with “😍😍😍”. There are a number of ways one could take this: 1) maybe she’s just being nice 2) maybe she just appreciates the fact that I look gorgeous in my photo or 3) maybe she’s in love with me. There’s a good chance that the heart eyes under a pic from a friend doesn’t mean anything at all…. but what if it does. Hence, “The Heart Eyes Conundrum”. But on the other hand, if it is your intention to tell someone you love them in vague, indiscriminate ways, this is perfect. My friend Monique and I, have a recurring joke about the use of faving tweets to hint that you’re interested in someone and clearly someone at twitter was paying attention to us #influencers because now we have a less subtle tool to fire off those sublikes. “Hey great tweet, also I’m in love with you”, “wow I like the way you think, also I can’t live without you”, “haha that’s really fun, we should get married”; the new like button can allow you to say so many more words than ever before.

The other problem here is the use of the casual fave seems irresponsible now. I and many other others used to fave tweets purely as mere acknowledgements that your tweet was read. It was a read receipt that was silently understood. The heart seems excessive for that and could lead to misunderstandings you never planned for. This is what I refer to as “The Ralph Wiggum Paradox”. In the season 4 episode of The Simpsons titled “I Love Lisa”, Ralph is the only kid in class who didn’t get a Valentine’s Day card from the other kids. Lisa feels bad so she just takes one of her leftover cards and puts Ralph’s name on it and hands it to him out of pity. Ralph is understandably excited but he takes this purely nice gesture as genuine interest. The card said “I choo-choo-choose you” and Ralph believes it fully with no real evidence that Lisa has ever shown an interest in him before. Lisa did something to be nice and to let Ralph know that his existence is acknowledged but instead Ralph took the action literally and believed himself to be cho-cho-chose. On the surface it would seem silly that someone might read too much into a “like” for a response to a tweet about a good Jamaican restaurant in the city, but when you see that heart icon show up in your notifications it does something to you and causes you to believe things that make no sense. With great likes come great responsibility.

Of course, none of these genuine concerns are the real heart of the issue. It’s about exclusivity and the specialness of twitter over the instagrams and the facebooks. The star separated twitter and without it, it’s just a reminder that twitter is moving closer to the uncool zone and we’ll all soon be moving on to something else. I mean, I’m sure this is true but at least the hearts are nice to look at before we go.