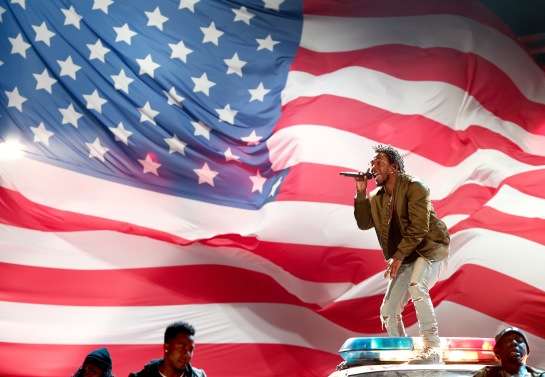 At the End of The Sellout, Paul Beatty’s merciless satire of the intersection between black culture and America, there’s a moment when the main character stands up in a room full of other black people and poses the question: what exactly is “our” thing?”

For much of 2015 we’ve seen a surplus of rappers grapple with their identity. From how they look at themselves to how they look at their people to what fame has meant to their lives within this context; the music has been a reflection of the internal conflict these artists face.

Kendrick Lamar’s To Pimp A Butterfly is the most obvious example of this. Both for its obvious uses of symbolism to talk about fame and for its explicit college textbook insight on Blackness. Kendrick’s purposefully uncomfortable, erratic record finds him jumbling guilt and success and the concept of duty. “What does Kendrick Lamar represent” is a question that weighs heavily on his mind and it’s a question he is constantly working through. A song like “The Blacker The Berry” rages against systemic racism before confronting intercommunity violence by veering dangerously close if not right into respectability. And yet, you have a song like “Alright” that promotes the idea that no matter how bad it gets for black people in America, we will survive. It’s our “We Shall Overcome” and its usage in protests and parties signify such. Kendrick uses the desolate environment from which he came and his newfound fame as a springboard to express his turmoil, much in the same way that Vince Staples does in his major label debut: Summertime ‘06. But where Kendrick is ultimately motivated by religious faith and hope, Vince comes off mostly jaded and hardened; choosing to personify the various characters spiraling towards the same dead end that is urban plight.

On the album’s most melancholy track “Summertime”, Vince laments: “my teacher told us we was slaves, my momma told us we were kings/I don’t know who to listen to, I guess we’re somewhere in between”. These are lines that pierce the heart and get to the root at the tug of war between what blackness means to society and how black people have to counterbalance it. There is no benevolent God in Vince’s world. The moral arc of the universe bends towards chaos and Vince expresses an acceptance in this fact while still chasing after any beauty that may be left. Instead of hope, Vince gives you the stories of dealers, crackheads, gangsters and those who mourn to remind you that there are people living in ruin that deserve to be heard. There’s survivor’s guilt in these raps much as in the same way there’s survivor’s guilt hidden passed the decadence and thrill in most trap music. Maybe the biggest example of this in 2015 is found in Future’s music.

I’d argue that there isn’t anyone in music who had a more eventful year than Future. For Future, his 2015 started in October 2014 with the release of his Monster mixtape; a tape that saw him backtrack from that pop direction of his last album Honest and return to a grimier, street aesthetic while still maintaining just as much vulnerability. “Throw Away” is a breakup song in the truest sense: full of anger, defensiveness, passion and tears. It’s at one moment completely ridiculous (“fucking these hoes mean too damn much to you”) and the next extremely open-hearted (“if loving me in public ain’t safe, you can take my love and hide it”). “Codeine Crazy” is just textbook depression: an open admission to taking drugs to feel better about life. Future followed Monster up with 2 more great mixtapes (Beast Mode and 56 Nights) that follow this same trajectory before releasing his 3rd album, Dirty Sprite 2. DS2 is one long sad party: the musical embodiment of being in the coolest place imaginable: bottles popping, money being thrown around and beautiful people everywhere and yet still feeling like shit because you realize you’re still empty inside. What separates Future the most from the other artists mentioned in this essay is that his feelings are rarely explicit. They come out in fragments and bursts during songs that on the face feel like party records or drug glorification. When Future raps that he’s “an addict and I can’t even hide it”, it’s nothing short of a cry for help hidden in your favorite chest pumping, turn up song. This is even more apparent in his collab record with Drake, What A Time To Be Alive. Both rappers more often than not, seem to be recording two different albums.

Future isn’t even hiding his depression most of the time here: going from heartbreak and sadness in “Digital Dash” to survivor’s remorse in “Live From The Gutter”. WATTBA is not a great record but it is an interesting one full of more pain that was probably expected from casual fans of Future (and from the album title itself). A fun activity that many people who are charged with writing about music seem to be engaging in is the contrasting of Drake and Future as the story between an opportunistic, vain sycophant (Drake) and a nihilistic, pure street rapper (Future) but these labels are unfair to both men. Drake has spent an entire career wearing his heart on his sleeve for better or for worse. Regardless of whether or not you think the music is good, Drake is an artist who expresses everything about himself. He’s an open book: we know when he’s in love, when his heart aches, when he’s being passive aggressive or condescending and when he’s just committing to the “business of rap” in order to sell himself as a product.

Drake’s album/mixtape If You’re Reading This, It’s Too Late didn’t signify a change so much as it allowed Drake to fully embrace the Jay Z lying inside him. Full of calculated bangers, cockiness and joie de vivre, the album felt different from Drake’s previous work in that it focused less on emotions and more on the moment. That’s not to say it’s completely devoid of insight, one of the best lines of the whole record comes from “You & the 6”, a personal conversation between him and his mother, where he raps “I used to get teased for being black and now I’m here and I’m not black enough”. There’s always been an inherent whiff of this attitude in the criticisms levied at Drake, whether it’s about his persona, his musical acumen or his brand. Drake’s blackness for whatever reason (be it how he carries himself or his racial makeup) is allowed to be dissected and, at least for this year, Drake has addressed it at many points in his music this year. Drake may be Disney at this point but it seems silly to pretend he’s never exposed his soul for his audience.

For my money, the best exploration of blackness in terms of fame and inner torment was made by Earl Sweatshirt. Earl’s third album, I Don’t Like Shit, I Don’t Go Outside, picks up where Doris left off: exploring a celebrity that Earl never asked for and resents while trying to figure out what kind of person he wants to be. I Don’t Like Shit is filled with the ghosts of personal demons floating throughout. It is everything that To Pimp A Butterfly is without the pretense or the theatrics; punch your soul music over punch your face beats. Earl is the most fascinating person in rap to me because he seems to openly hate being a rapper while loving rap. His music is guarded and purposely uninviting in order for him to feel comfortable enough to actually share himself.  Celebrity is hell and for a black artist, it can feel even more intolerable; if there was a theme amongst many rappers in 2015 it was that music could allow for a way to cope in this prison. More important to that blackness, these artists proved that the question of what “our thing” is is more prescient than ever.